No Shuttleworth Fly Navy in 2023

The June airshow will be the
'Shuttleworth Around the World Airshow'

For 2022 the very popular ‘Fly Navy’ airshow returned, after surrendering its Shuttleworth summer slot to a new ‘Flying Festival’ in 2019.

In the interim, the 'Flying Festival' theme provided scope for a wider range of aircraft to be displayed. The Red Arrows were the headline display in 2019 but equally popular with enthusiasts was the last-minute announcement that nine of the Dakotas taking part in Daks over Normandy would be on static display at the show and that some would fly out afterwards.

A similar format, but entitled Flying Festival of Britain, was retained in 2021, celebrating innovation and remembering the 1951 Festival of Britain when the Shuttleworth Collection’s Comet was suspended from the ceiling in honour of its record-breaking role.

The returning Fly Navy show in 2022 show was a joint effort between two power houses of naval aviation: the Shuttleworth Collection and Navy Wings. The latter had a substantial presence, in personnel as well as aircraft, and a huge marquee for their members, benefactors and guests, focusing their might on the highest profile naval aviation event of the year in the absence of the show at RNAS Yeovilton. Just outside their private area was the framework of a Maurice Farman S7, which is undergoing restoration at Old Warden.

There was also a substantial input from two other naval aviation stalwarts, Kennet Aviation, who are now based at Old Warden and The Fighter Collection, based at nearby Duxford. (... continued below the table)

Navy Wings made one of the biggest impacts, with greater strength in rotary winged aircraft than visitors would normally expect at Old Warden. Especially impressive were the Wessex and Sea King pair, which sat beside each other on the crowdline and flew together during the display but the four gazelles of the Gazelle Squadron and three Wasps certainly made a huge impact, too.

Fly Navy was due to feature four Fighter Collection naval aircraft: the Grumman Bearcat, Grumman Wildcat, Nimrod Mk I and Goodyear Corsair. In practice, the Wildcat was at Old Warden prior to the show and took off for the display but had a technical fault so returned to its Duxford base. The Nimrod displayed as a solo earlier in the schedule in the absence, on the sick list, of the Gladiator and the remaining two Fighter Collection aircraft, the Bearcat and the Corsair, displayed both as a pair and as solos.

One of the display items was a multiple-flypast by a Battle of Britain Flight Spitfire. We all love the Battle of Britain Memorial Flight and what it stands for. We also love their full displays, especially if the Lancaster is flying. But there is a downside. The Flight are quite specific on timing and they also require 'clear air' between their displays and the previous and following displays. This inevitably results in a no-fly period, which, at the Fly navy airshow, was rather long. Quite a large number of people left the show during that interval. This was a great pity, as the short sharp shower that may have influenced their departure soon passed and the weather afterwards was better than before. As well as the BBMF Spitfire, the Shuttleworth Mk Vc flew as part of a trio of navy-linked warbirds which also included their Mk Ib Sea Hurricane and the Navy Wings Mk XVII Seafire. The three flew together before breaking into a simultaneous Sea Hurricane solo and Seafire / Spitfire tailchase.

Many more of the displays are Old-Warden based, including up to six Edwardians that were listed as possibles if the conditions were good enough. When it came to the time for their display the weather was better than it had been earlier and both the Boxkite and Avro Triplane were taken to the runway. There was an excellent and long display of the Triplane but the conditions were judged not quite good enough for the Boxkite.

As well as the intended displays, there are incidental flying highlights at airfield-based shows. It was especially good to see the Navy Wings Stinson Reliant and Tiger Moth, which, although not on the display list, could be seen flying when they arrived and left. There were also a good number of interesting privately-owned aircraft, notably a pair of Staaken Z-21 Flitzers. 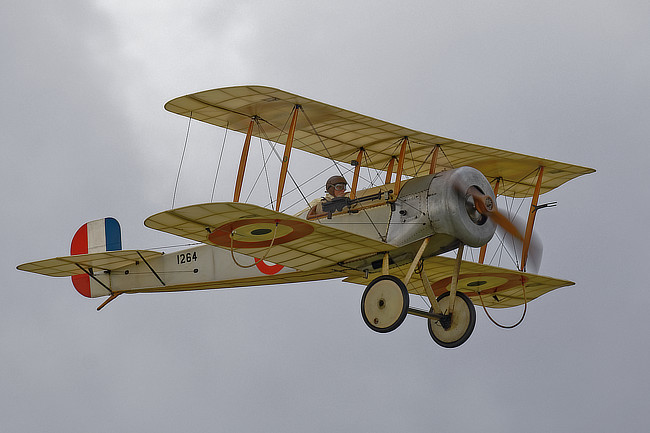 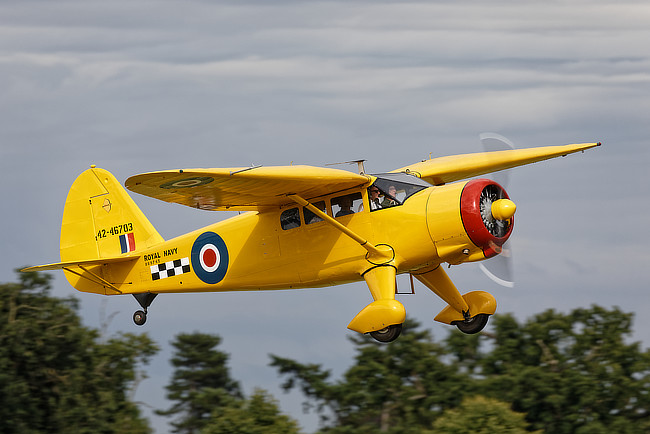 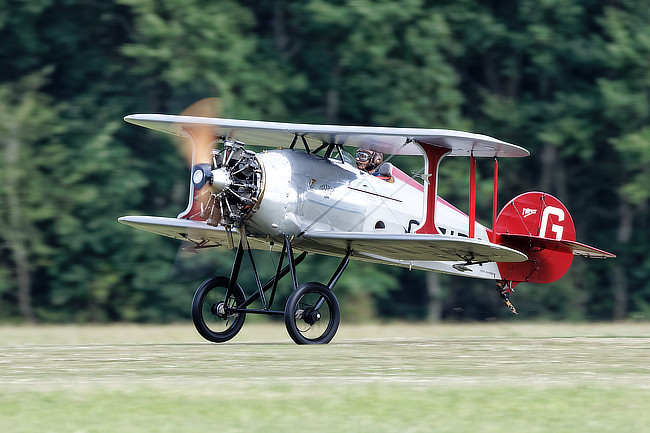 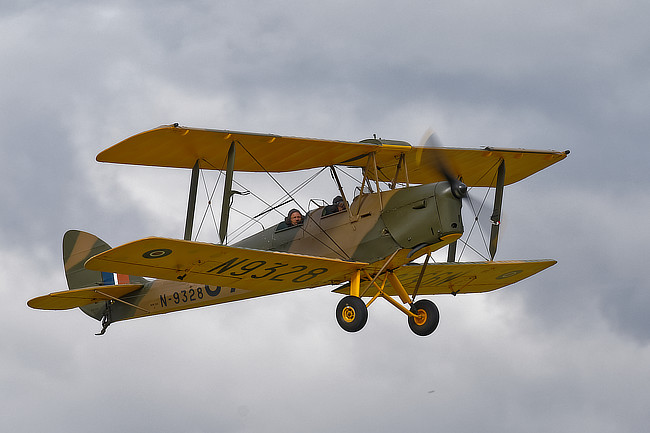 Fly Navy was one of the best shows anywhere in 2016. In 2017 the weather and cancellations reduced its popularity. Fly Navy was back in 2018 and enjoyed a repeat of the 2016 excellence.

As its name suggests, the show has a naval theme, so visitors enjoyed a wide range of aircraft, all with naval links. Unfortunately, some of the high profile displays were withdrawn since the original (provisional) list was published (see greyed-out items in the table) but the Collection's Spitfire Mk Vc did fly, solo and with the resident Sea Hurricane, in addition to the aircraft originally listed, including the weather-dependent Edwardians. For the third Old Warden show in a row, the Lancaster made what was billed as a flypast but which, in the event, became a triple circuit with lots of topside in wonderful evening light.

The Post Code (for sat nav) is now SG18 9DT (this is to the new entrance. The old postcode, SG18 9EP, no longer takes you to the show entrance). As with all shows, ignore the sat nav in favour of local show signs as soon as you see them.

The location is already built in to the link but please check, and change as necessary, the dates, number of rooms and number of guests.

Weather for the Old Warden area

What the forecasts tell you

The Met Office 7-day forecast includes actual and "feels like" temperatures, the likelihood of rain, wind speed, wind direction, wind gusts and visibility: the latter can have an impact on the viability of displays.

Prices, details and a link to buy are on the show's web page

For links to other travel and route planning web sites, click the 'Getting There' tab