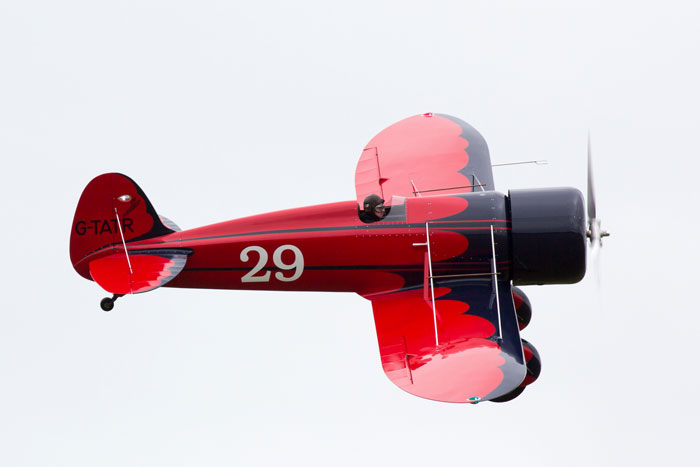 Travel Air Mystery Ship: one of the more unusual displays in 2018

Run by volunteers for the benefit of children's and local charities, the Little Gransden Air and Car show has grown from a small local show to one of the major UK airshows, whilst retaining its friendly, local feel.

The show plans over three and a half hours of flying from early biplanes, WW2 warbirds through to modern extreme aerobatics featuring solo and formation air displays with world championship aerobatic pilots. The list of display aircraft is shown in the table and will grow as the event date approaches.

On the ground there are due to be more than 300 classic, historic, vintage and ex-military vehicles from the earliest days of the internal combustion engine, showing off the amazing variety of engineering and design skill that has gone into getting us around over the last century or so; also vintage tractors, stationary engines, scale model aircraft, a glider and a rare F1 aircraft racer.

There will also be a funfair, over 70 trade stands and a craft fair selling hand made items including clothing, pottery, jewellery, gifts, toys, cakes, sweets and plants plus live music from the local band ‘Junkyard Preachers’.

The show has been going since 1992, when it started as a car show with a single flying display. Now there are usually 300 vehicles and over three hours of flying alongside other ground attractions.

The show is organised by volunteers for the benefit of Children in Need and local charities.

In 2018 there was an interesting series of displays, blending traditional favourites, such as the Global Stars, with the more unusual, including the Mystery Ship and an L29, Soviet block fast jet trainer.

The line-up for 2019 is equally varied. Details are in the table.

The show has been going since 1992, when it started as a car show with a single flying display. Now there are usually 300 vehicles and over three hours of flying alongside other ground attractions.

The show is organised by volunteers for the benefit of Children in Need and local charities.

On the ground expect about 80 traders and exhibitors showing and selling not only aviation and motoring goods but also artwork, antiques, collectables, crafts and clothing.

Use sat Nav SG19 3BP until you get close, but ignore the sat nav in favour of local directions signs as soon as you see them. There are links to route planners in the Travel Advice column if you prefer to plan ahead or don't have sat nav.

The nearest station is St Neots, which is accessible by train from Peterborough (about 20 minutes) and London. St Neots is about 12Km from Little Gransden.

Click the blue Expedia name for a list of hotels and guest houses near the show. The venue is already built into the link but when the list comes up you do have to enter your dates and adjust the number of rooms and guests, if necessary.

Sat Nav SG19 3BP
For links to travel and route planning web sites, click the 'Getting there' tab