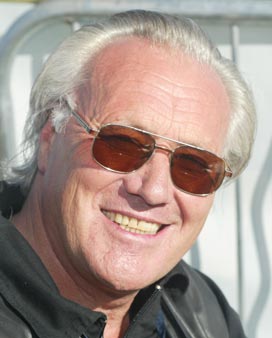 Brendan O'Brien
Click his picture to go to his own web site to read more.

Airshow visitors will recognise Brendan's voice as the commentator at shows throughout the UK and abroad. Television viewers will recognise him as the presenter of TV programmes such as 'Spitfire Ace' and various features on the Wings channel. Pilots and aircraft professionals respect him as an accomplished pilot. But these are only some of his achievements. Lecturer, after dinner speaker, flying instructor and examiner; Brendan is well qualified to talk you through the happenings at airshows.

Brendan O'Brien's flying experience extends to over 13,000 hours on over three hundred types of aircraft on every continent, including Antarctica. He holds over two hundred aviation world records, is a test pilot, and is authorised by the CAA as an airshow display holder and examiner.

Brendan is one of the few people who is licensed to fly every kind of flying machine; non-powered, powered, fixed wing, rotary, seaplane, ski-plane, microlight - if you can think of it, he can fly it. His company, Skyfever, provides almost every kind of flying service: tuition; examination; organising a complete display or even giving novice pilots a plane to follow. Skyfever's subsidiary, O'Brien's Flying Circus, does crazy flying, lorry-top landing, Otto the helicopter and pyrotechnic displays, with fireworks from the wings: usually with Brendan in the pilot's seat.

So when you hear Brendan O'Brien in the commentary box you can be sure he knows what he is talking about.