Airshows at Goodwood in 2020

2020 Festival of Speed and Revival airshows at Goodwood 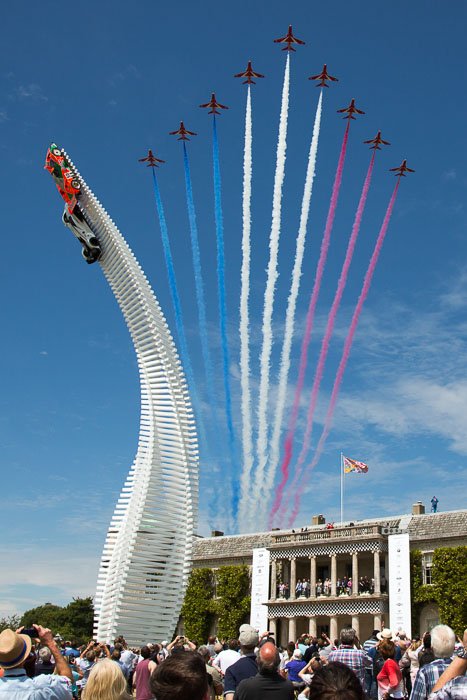 Red Arrows arriving at the Festival of Speed

The two main flying days are both wings and wheels events and are the leaders in their class: Goodwood Revival and Goodwood Festival of Speed.

Goodwood Revival, usually in September, has a focus on F1, GT and saloon cars and motor cycles dating from 1966 or before. These cars are often driven by current and past champions, reviving the days when the Goodwood was home to the primary race circuit in the UK.

The air displays usually include wartime aircraft and there are around 30 pre-1966 aircraft on static display in the 'Freddie March Spirit of Aviation'.

Goodwood Festival Of Speed is usually in late June or early July, typically linked to the date of the British F1 Grand Prix. It generally includes fewer but newer aircraft including modern types, again against the background of a massive range of motors and all things 'speed', including bikes.

The Goodwood estate comprises the historic Goodwood House and estate, with a racecourse, park, hotel with health club, and an airfield surrounded by an active motor circuit.

The airfield, known during WWII as Westhampnett, was a busy satellite station to Tangmere and was the airfield from which Douglas Bader flew his last mission.

The airfield is situated between the south downs and The Solent, well clear of controlled airspace, and now provides flying lessons and a base for private aircraft as well as events with a flying element.

From the east and west, take the A27 towards Chichester and follow the airshow signs as you get close.

From inland Sussex take the A29, A23 or A22 south to the A27 and head towards Chichester, picking up the signs as you get near.

From further north, get to the M25, leave at junction 10 and head south on the A3 until you pick up the event signposts.

Postcode for Sat Nav is PO18 0PX, but ignore it in favour of event signs when you get close.

National Express have direct coach services from London, Southampton and Brighton with connections from further afield. All services terminate at Chichester bus station from where there is a bus service to the event.

The nearest railway station is Chichester, with services from London Victoria. Alternatively, trains from Waterloo go to Haslemere about 30 minutes from Goodwood. Taxis are available at the stations. There is a special bus service from Chichester station to the show.

Click the blue Expedia name for a list of hotels and guest houses near the show. The venue is already built into the link but when the list comes up you do have to enter your dates and, if necessary, adjust the number of rooms and guests.

The International Hotels Group have a Holiday Inn about 20 miles away in Portsmouth and a Holiday Inn Express in Southampton, 30 miles away. There are six Premier Inn hotels within 15 miles, the nearest of which is in Chichester.

Sat Nav PO18 0PH
For links to travel and route planning web sites, click the 'Getting there' tab