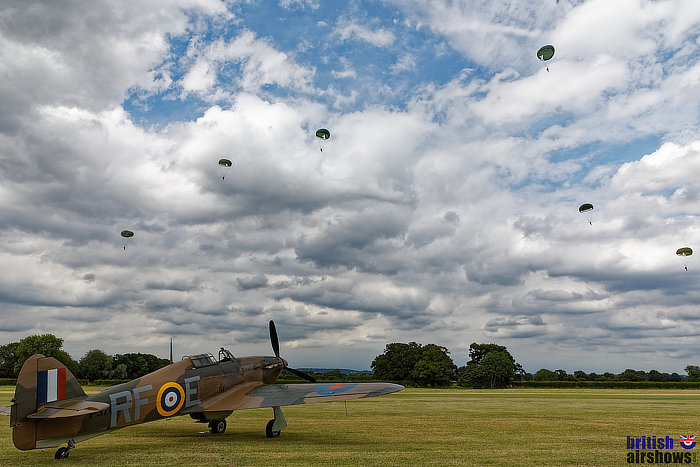 The show was to have been in June but was postponed because of the Covid-19 outbreak. The organisers confirmed following a review on July 6th that the show will go ahead but are keeping a close watch on the situation in case the government have to introduce more stringent measures. Furthermore, the previously 2-day show will run over three days in 2020, to include the Friday as well as the weekend days.

More details of other displays will be on their web site and here over the coming weeks.

Originally farmland, the site became a First World War training school in 1914 but reverted to a working farm following the war. In 1942 it was requisitioned by the Airfields Board and became Lashenden aerodrome. The Canadian Air Force moved in during August 1943, flying Spitfire 1Xb’s under the command of ‘Johnnie’ Johnson. The United States were later based here flying the North American P51D Mustang until they left in June 1945 when the airfield closed.

Flying resumed at the now-private aerodrome in 1963. Aero Legends arrived in 2014 and introduced flight experiences.

The Aerodrome is about 15 minutes (in normal traffic) south of Junction 8 of the M20. Use Sat Nav TN27 9HX until you get close, but ignore the sat nav in favour of local directions signs as soon as you see them. There are links to route planners in the Travel Advice column if you prefer to plan ahead or don't have sat nav.

Headcorn has its own railway station on the London Charing Cross to Ashford International line. A taxi from the station to the aerodrome takes about 5 minutes in normal traffic.

Expedia list a good selection of smaller, as well as bigger, hotels and will find accommodation in villages and small towns as well as the main centres. Expedia also give, and take, Nectar points.

Click the blue agency name for a list of hotels and guest houses near the show. The venue is already built into the link, so when the list comes up you just have to enter your dates and adjust the number of guests, if necessary.

A five day Headcorn weather forecast from the BBC

For links to travel and route planning web sites, click the 'Getting there' tab