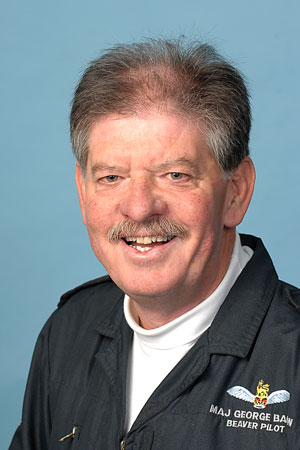 MBE - Member of the British Empire, awarded for support to NATO Operations in Kosovo.

Although only one amongst a long list of flying and military achievements, these days George 'Smokey' Bacon is probably best known by airshow fans as the familiar and all-knowing voice whose constant stream of wisdom adds to their knowledge and enjoyment both of the aircraft and of the people flying them.

Much speculation surrounds the nickname 'Smokey': uninformed speculation includes an affinity to that flavour of crisps. George himself tells the story of an air incident in a field near Calgary, Canada, when his plane was downed but George emerged intact from the afflicted craft. The engineers fingered "smokey" into the smoke stains above his name on the side of the cockpit. Thus was born the title 'Smokey Bacon', which he is quite happy for people to use.

George graduated from Southampton university with a degree in Psychology and Indian (Mughal) History, followed by a sabbatical year as president of the student union, but his more relevant background is in the RAF. He joined in 1975 and trained initially on Bulldogs and JP3s, winning the Sword of Merit. After qualifying as an Officer he was streamed for fast jet training and moved on to the Jet Provost Mk3a. Unfortunately he was grounded for medical reasons after an air incident and medically discharged from the RAF. Whilst grounded he returned to his long-standing enthusiasm for broadcasting and developed a career as a presenter, leading to significant freelance work as a broadcaster with the BBC and BFBS in both music (mostly jazz) and event commentaries.

Fortunately, George enjoyed a full recovery from the problems that had caused his grounding. After a spell as an Education Officer in the army, was declared fit for flying and selected again for aircrew training, this time with the Army Air Corps. He was awarded his wings in 1981. He served in flying roles, including photo reconnaissance and surveillance in various European theatres, the Gulf and Canada, where he also qualified on both float and ski planes, becoming a specialist in manned airborne surveillance projects around the globe and consultant to the wider defence Industry.

George moved to the Army Air Corps Aviation Standards Branch and subsequently became their Air Displays Manager, with responsibilities for the 'Blue Eagles' and the Army Historic Aircraft Flight.

As well as a TA reserve pilot, Major George 'Smokey' Bacon was also Head of Recruiting, Pilot Selection and Displays for the AAC and a Civil Aviation Authority Air Accident Investigator. He remains CEO of the British Air Display Association, Chairman of Army’s Historic Flight Charitable Trust, historic aircraft display pilot, Flying Display Director, an active Ambassador for Aerobility and, of course, broadcaster and airshow commentator. In any spare time, George enjoys skiing, sailing and cycling. He also spends quite a lot of time doing DIY on his Hampshire property to accommodate his expanding and diverse family.

George has amassed nearly 4,000 flying hours on about 20 different aircraft, largely with the AAC but partly in his role as International Military Marketing Director for the Swiss-owned Pilatus Britten-Norman, where he was responsible for world-wide military sales of the Islander and personally delivered the aircraft to many of his customers around the world. Two aircraft he has not yet flown but at the top of his wish list are the Mustang and the Catalina.