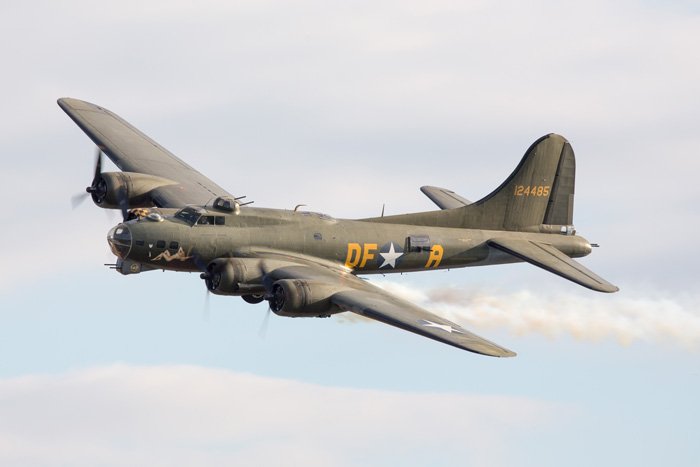 A favourite Duxford resident, Sally B, displays at most Duxford airshows

In recent years, The Imperial War Museum (IWM), Duxford, has had major airshows at least three times each year.

These 'normals' were disrupted in 2020 by Covid-19, when May's Duxford Air Festival and July's Flying Legends were cancelled. Then, in August, The Fighter Collection and the Imperial War Museum announced that Flying Legends would not return. Flying Legends is now being held at Sywell. It was expected that The Battle of Britain Airshow would go ahead until very close to the show date, when it, too, was cancelled.

Smaller airshows, called 'Showcase Days', were also in the schedule. These have much less flying than major airshows and a lower ticket price - free to IWM Members.

For 2021 the Festival has moved from its normal May slot to nearer the July date that has traditionally been occupied by Flying Legends but the Battle of Britain Airshow retains its September date.

Showcase Days are retained but will be called 'Flying Days'

Select a specific airshow from the top menu, or click a link in the table below, for more details.

The next major event is the Festival on 24th - 25th July.

Duxford was an airfield in the First World War and was an RAF fighter station and then an American fighter base in the second. It was the base of the first operational Spitfire squadron during WW2.

It is now home to the Imperial War Museum with aviation, tanks, military vehicles and naval exhibits as well as the Fighter Collection, The Old Flying Machine Company, The Aircraft Restoration Company, Historic Aircraft Collection, B-17 Preservation Society and others.

Getting to Duxford Airshows

Duxford is in Cambridgeshire, off Junction 10 of the M11. If you are coming from the north, a signposted alternative is to leave at Junction 11 and take the A10 to Royston, then the A505. This is a much longer route designed to split the traffic up. The Post Code (for Sat Nav) is CB22 4QR but some systems will only recognise the older code CB2 4QR. There is a park and ride at Junction 11 of the M11 on show days. The bus is free (you have to show your airshow ticket) but parking isn't.

The easiest (but not the closest) train station is Cambridge, which has a direct service from London. A courtesy bus runs between the show and Cambridge station on show days. Alternatives are Royston, where there is usually a Park and Ride, and Whittlesford Parkway, which is the closest to the show but does not have a courtesy bus or Park & Ride.

There are three Premier Inn hotels in Cambridge and another four within about 20 miles of the show.

Travelodge have one hotel about 4 miles from the show, which tends to be available a little bit longer after other low-cost hotels have been fully booked. There are three more Travelodge hotels in and around Cambridge

Weather for the Duxford area

A 14 day forecast from the BBC