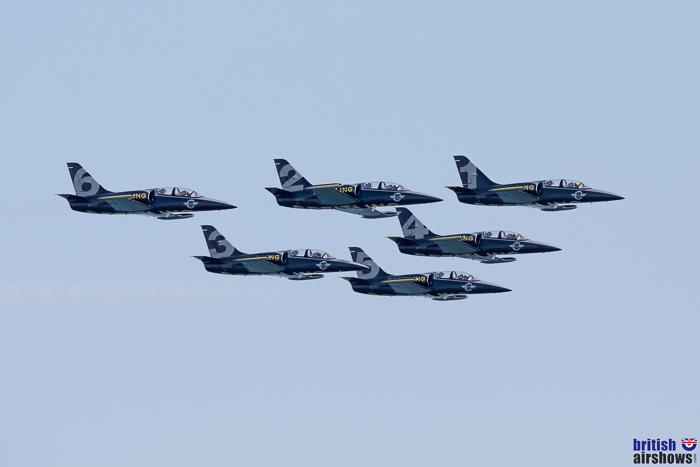 The Breitling Jet Team headlined in 2019

For the last few years there has been a family airshow at Biggin Hill, one of the most important WWII aerodromes, with close links to the Battle of Britain.

However, the Festival of Flight will give way in 2020 to a public event commemorating the 80th anniversary of the Battle of Britain and The Hardest Day, illustrating these extraordinary events in UK history, both in the air and on the ground.

The Battle of Britain was the first campaign to be fought entirely in the air. RAF Biggin Hill played a significant role in the battle, especially on the 18th August, the climax of the Battle that determined the course of WWII, the day that became known as "The Hardest Day".

More information about the events will be available here in due course as well as on the airport's web site where you can sign up for regular updates, and on the airport’s social media platforms using @lbhacommunity.

Airshows at Biggin Hill were organised by Air Displays International until 2010. In 2011 there was an airshow said to 'better reflect the airport's 'emerging role as a Business & General Aviation Aerospace Centre', but with recognition of its past' with WW2 aircraft displays. A new sequence of annual airshows entitled the 'Biggin Hill Festival of Flight' began in 2014.

Biggin Hill was a famous fighter station that played a major role in the Battle of Britain and, despite repeated attacks, remained operational throughout. Biggin Hill is now an international airport and home to several warbirds owned and operated by the Biggin Hill Heritage Hangar, based at the airport.

This will be the sixth Air Festival since the airshows at Biggin Hill restarted in 2014 and retains the two-day format introduced in 2017.

The first display to be announced is an impressive one. The Breitling Jet Team will return to Biggin Hill for the first time since 2006 after their impressive return to the UK skies at Bournemouth in 2018. Mike Ling will also be back at Biggin Hill, this time not as Red 10 but as a pilot for The Blades who are due to fly at the show and the Royal Jordanian Falcons will fly their four Extra 330LX aircraft.

The RAF are being very supportive this year. The Red Arrows will not display because they will be in North America at the time of the show. However, the very noisy and equally popular Typhoon will be there, as will the Tucano in its final year of service with the RAF before being replaced. The Battle of Britain Memorial Flight will be sending a 'full set' with the Lancaster, a Hurricane, a Spitfire and the Dakota all on the flying display schedule. Two more Dakotas will also display in this 75th anniverary year of the Normandy landings in which the type had such an important role.

More aircraft due to display are listed in the table. 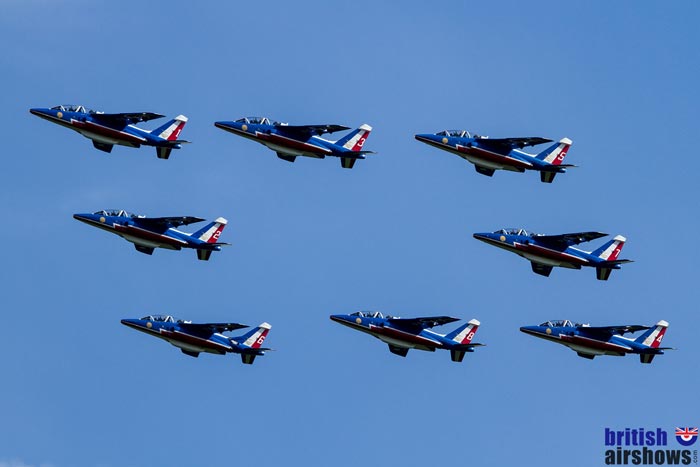 The fourth year of the show in its new guise was stretched to 2 days and celebrated the centenary of the airport.

Since it restarted in its present form in 2014, the Festival has been rather fraught with problems, ranging from woefully inadequate toilet and refreshment facilities in the first year, terrible parking control for the first two years and bad luck with the weather. The infrastructure problems had been sorted by year three and the date change helped on the weather front, so 2017 was set to be the year when it all came right for Biggin Hill. Unfortunately, there were still some complaints about traffic management within the grounds, so possibly some more work to do there.

The show itself was immeasurably better than the previous few: the displays by the Czech 'Hip' and 'Hind' were not only highlights of the show but some of the highlights of the 2017 airshow season. Most of the other highlights came from abroad, too, in the form of the Belgian F-16 and the only UK display by the Patrouille de France. Add the Red Arrows, Typhoon, Chinook and BBMF, plus family favourites the Great War Display Team, Wingwalkers and Trig Team and the show was the best at Biggin Hill for a long time. (... continued below the table)

Credit for the success of the show is down largely to foreign participation, which accounted for a third of all the displays. The Patrouille de France; the ever-popular display by the Belgian F-16 and the contributions from the Czechs set the show apart, not only from earlier shows at Biggin Hill, but from other aerodrome shows in 2017. The two-day August format is due to return in 2018. We are hoping the line-up will be just as good and management of the car park exit reverts to 2016 efficiency.

Summary of the 2016 show: A Decent Family Show 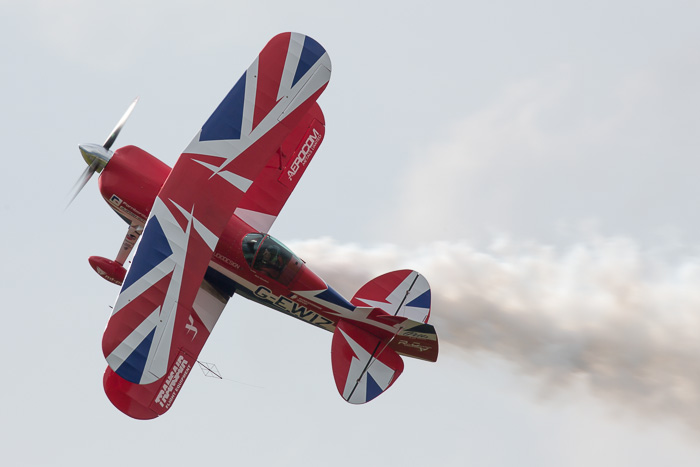 Back for a third year in its new guise, there was around 4½ hours of flying during the rather drab and slightly damp afternoon at this year's Festival of Flight. This is a family show and featured plenty to delight the family audience, including the wingwalkers and turbulent display team, although there was little innovation or combination flying for the regular airshow-goer to enjoy.

Thankfully, lots of the logistical problems suffered at the two previous shows had, at last, been sorted out, so getting in, leaving and making use of the toilet and refreshment facilities were all no worse than at most air shows - and better than many.

The flying displays included the Red Arrows and a Spitfire and Hurricane from the BBMF, hot from the Queen's 90th birthday flypast, although the Lancaster, originally expected, was still unserviceable. The Apache Helicopter Display Team had been booked but support for the show was withdrawn by Joint Helicopter Command, so the Apache display had also been cancelled and the general weather situation between his base and the airfield prevented Terry Martin bringing his Westland Wasp.

The main historic attractions were the Fairey Swordfish, Sally B, the Catalina and the Blenheim and this was also the first public outing Hangar 11's Mustang in its new 'Red Tails' livery. With the exception of Sally B, these aircraft also adorned the static line-up, where those who were not keen to sit on the flightline could see at reasonably close-quarters the planes crew, fire-up and manoeuvre, adding significantly to the spectacle.

The main display was preceded by around 30 minutes of very skilled and varied flying of large (and expensive) scale model electric and traditionally-fuelled aircraft, representing both vintage and jet types. Towards the end of the main flying display, G-Force Aeros demonstrated rare skill when Chris Burkett flew his Extra 300 and Mike Williams flew the scale model of the same aircraft, solo and in formation. (... continued below the table)

Among the civilian highlights were Richard Goodwin with his usual stonking performance, for those who stayed beyond the Red Arrows, and the Bronco, without the team's Skyvan.

On the ground two Westland Gazelle helicopters from the Gazelle Squadron were the most popular of the static displays. The team allowed visitors to get up close and even sit in one of the Gazelles. There was also a massive funfair, children's amusements, meet the pilots and the usual trade stands.

At many shows the VIP, sponsor, veteran, media and other enclosures consume so much of the crowdline that there is little left for the paying customer. A major plus for the Biggin Hill show is the generous access to the crowdline, with relatively few allocated enclosures: these at the end rather than the centre of the flightline, leaving the coveted central area for anyone who arrives early enough to base themselves there.

Keeping everyone abreast of developments as they happened were commentators Andy Pawsey and Ben Dunnell, with the specialist commentators for some teams including Red 10 Mike Ling for the Red Arrows. Unfortunately the audience in the centre of the crowd line couldn't hear a word he said over a young band screeching into a rather better audio system on the main stage. Volume aside, the stage entertainment was popular and varied, with plenty to cheer the youngsters as well as the vintage ballads more common to airshows.

Biggin Hill is on the A233 in Kent, quite close to Bromley. From most directions, take the M25 and exit at junction 4. Don't try junctions 5 or 6, even from the west, because of congestion on nearby roads. There are links to route planners in the Travel Advice column if you prefer to plan ahead or don't have sat nav. The show is well signposted and there are usually several routes into the airfield to split up the traffic queues. Traffic news is provided by the airshow radio - the frequency is signposted as you get close.

National Express do not go direct to Biggin Hill, but they do have services from London to Sevenoaks, Coulsdon, Hooley and Wallington all about 6 - 7 miles away. There is also a service between Hooley and Brighton.

Stagecoach and Metrobus have local bus connections to Biggin Hill from local towns, coach stations and train stations. There are details of local services here.

The nearest station is Hayes, about 4 miles away.

Click the blue Expedia name for a list of hotels and guest houses near the show. The venue is already built into the link, so when the list comes up you just have to adjust the dates, number of rooms and guests, as necessary.

For no-frills hotels, the International Hotels Group have nearby a Holiday Inn Express about 9 miles away in Croydon ; there are five Premier Inn hotels within 10 miles of so of the airport.

Sat Nav TN16 3BH
For links to travel and route planning web sites, click the 'Getting there' tab