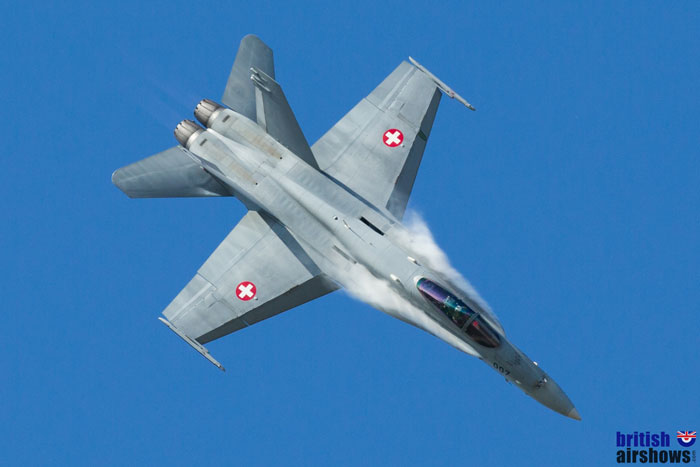 In the absence of a show in Ayr in 2019, it was hoped that an alternative venue, possibly Kirkcaldy, would host it in that year but it was not possible to agree the arrangements. The 2019 Scottish International Airshow was therefore not held but the TSIA said that the show, due back in Ayr for 2020, would be 'bigger and better' than before, with a three-day Friday-to-Sunday format. However, a disagreement about funding (see the grey box) caused the show to be cancelled.

Details of any 2021 show have not been released.

Click any blue text to go to the source document.

The local authority was due to pay £250,000 towards the cost of the 2020 show but, as reported in the local newspaper, The Daily Record, they say they mistakenly paid an £80,000 invoice to the show organisers late last year. The news report suggested that the show was at risk unless the £80,000 was returned. The show organisers denied that the payment was a mistake.

As reported later in the same newspaper South Ayrshire Council said that, as the dispute had not been settled, they would withhold the £250,000 that would otherwise have been paid to help fund the show this year.

The organisers maintain that they acted properly and that no monies were received in error. Nevertheless, without the £250,000 they cannot afford to run the show, which has consequently been cancelled. The show's response to the Council's decision to withhold funds, and their statement about the cancellation, are on their Facebook Page

There is also an article in the Ayrshire Daily News which quotes directly from statements made by both parties.

An earlier airshow in Ayrshire closed in the early 1990's but, following the closure of the show at Leuchars in 2013, flying returned to the area in 2014 as ‘The Scottish Airshow’.

The first dusk flying was in 2016, followed by a full day's flying on the Saturday. In 2017 the show lost its flying after dark but stretched to a two-day Saturday and Sunday show. The 2019 show lost its Ayr funding and another venue was sought but not found. The show was due back at Ayr in 2020 but was cancelled following a disagreement with the South Ayrshire Council about funding.

The former 'Scottish Airshow' retains the newer 'Scottish International Airshow' title and two-day format for 2018. There will be no evening display this year, although after-dusk flying is due to return in 2020.

This year there will be two full days of flying along Ayr seafront on the Saturday and Sunday, featuring the best from the UK, including the Red Arrows, the Lancaster and the noisy Typhoon as well as the superb F/A-18 from the Swiss Air Force: and plenty more, as listed in the table.

An earlier airshow in Ayrshire closed in the early 1990's but, following the closure of the show at Leuchars in 2013, flying returned to the area in 2014 as ‘The Scottish Airshow’.

The first dusk flying was in 2016, followed by a full day's flying on the Saturday. In 2017 the show lost its flying after dark but stretched to a two-day Saturday and Sunday show.

There are two nearby Premier Inn hotels, one at the racecourse, about 3 miles out of town, and one at the airport, about 6 miles away.