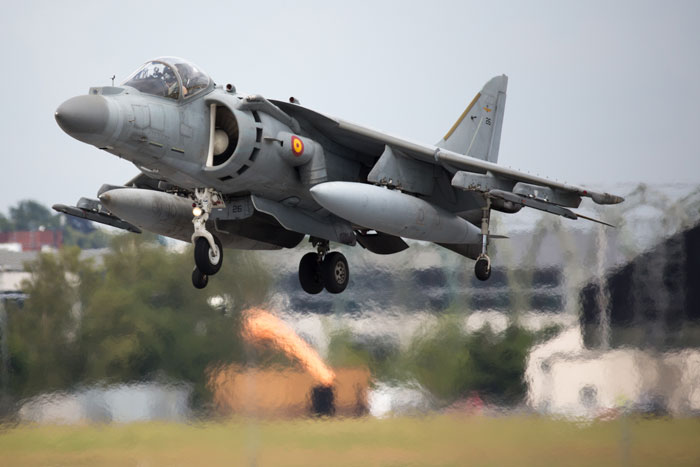 A Spanish Navy Harrier will fly at RIAT 2019

One of the world's most iconic jets will make a welcome return to the Royal International Air Tattoo this summer, almost a decade since it last made an appearance in a flying display at the Air Tattoo.

Until the arrival of the Lockheed Martin F35 Lightning II, the Harrier had been unique in being able to take off and land vertically, fly backwards, sideways and rotate on the spot. Its gravity defying aerial displays were regularly among the highlights of the airshow's flying programme.

Spanish Navy Harriers, in the form of the early AV-8S and TAV-8S variants, were last seen at the Air Tattoo in 1994. In 2010, an RAF Harrier GR.9 performed its final Air Tattoo display prior to its retirement from service in March 2011. Spain remains one of only a handful of nations that continue to operate the Harrier, Italy and the US (US Marine Corps) being the others.

"The chance to see a flying Harrier is always a hugely welcome one, and we at the Air Tattoo are delighted that the Spanish Navy will be participating at RIAT 2019, especially in this NATO 70th anniversary year. The Harrier has been a major part of NATO since it first entered RAF service 50 years ago and its attendance will be an important part of our tribute - as well as offering a spectacular flying display."

In addition to featuring exciting aircraft from around the globe, this summer's Air Tattoo will feature a wide range of entertaining and interactive activities in its critically-acclaimed Techno Zone, Activity Zone, Vintage Village and RAF Experience.

Tickets to the airshow, which is staged annually in support of the RAF Charitable Trust, can be purchased online at www.airtattoo.com or by calling 01285 713456. (Tickets for Friday 19 July come with a £10 money off merchandise voucher if booked before 31 January). All accompanied under-18s go free.