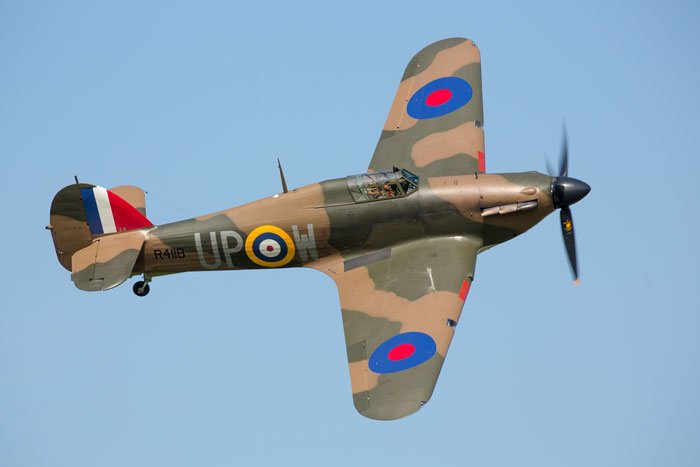 In addition to major airshows, The Imperial War Museum (IWM) Duxford has 'Flying Days', previously called 'Showcase Days'. In 2021 each of these Flying Days will be themed: an example is 'D-Day', to commemorate the RAF Duxford’s Squadron 19.

There will be a chance to visit the museum, pop up displays and experiences and then to enjoy hours of flying.

A summary of Flying Days in 2021 is in the table. More information will be added when announced.

Click the blue text for more details about the upcoming Flying Day.

Duxford was an airfield in the First World War and was an RAF fighter station and then an American fighter base in the second. It was the base of the first operational Spitfire squadron during WW2.

It is now home to the Imperial War Museum with aviation, tanks, military vehicles and naval exhibits as well as the Fighter Collection, The Old Flying Machine Company, The Aircraft Restoration Company, Historic Aircraft Collection, B-17 Preservation Society and others.

Getting to Duxford Showcase Days

Duxford is in Cambridgeshire, off Junction 10 of the M11. If you are coming from the north, a signposted alternative is to leave at Junction 11 and take the A10 to Royston, then the A505. This is a much longer route designed to split the traffic up. The Post Code (for Sat Nav) is CB22 4QR but some systems will only recognise the older code CB2 4QR. There is a park and ride at Junction 11 of the M11 on show days. The bus is free (you have to show your airshow ticket) but parking isn't.

The easiest (but not the closest) train station is Cambridge, which has a direct service from London. A courtesy bus runs between the show and Cambridge station on show days.

Alternatives are Royston, where there is usually a Park and Ride, and Whittlesford Parkway, which is the closest to the show but does not have a courtesy bus or Park & Ride.

There are three Premier Inn hotels in Cambridge and another four within about 20 miles of the show.

Travelodge have one hotel about 4 miles from the show, which tends to be available a little bit longer after other low-cost hotels have been fully booked. There are three more Travelodge hotels in and around Cambridge

Weather for the Duxford area